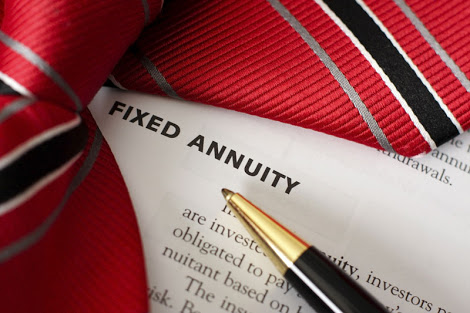 A first-class fixed indexed annuity puts you in position to collect a pension-like income, guaranteed to continue for as long as you and your spouse are alive. These annuities allow you to profit from the stock and commodities markets with no risk. This type of annuity simply uses financial market indexes, like the S&P 500, as outside reference points to determine your interest. Whenever the market (index) goes up, you make money; whenever it goes down, since your money is never invested or at risk in any way, you won’t lose a penny! Your money is always held safe, secure and guaranteed with the insurance company that issued the annuity.

Upon your death, every penny in the annuity goes to your named beneficiaries. Make sure you pick an annuity that gives you 100% of the gain in the index with no cap or limit on the interest. For example, if the index goes up 10%, be sure you’ll be credited the full 10%, even if there is a small fee on your profit, called a spread. For a small annual fee, you can also purchase an income rider that guarantees you’ll receive a set amount of additional interest each year, whether the index is up or down. This extra interest will be credited for every year you delay receiving your monthly income. On the best indexed annuities, this extra interest is stacked on top of your indexed interest. There are very few indexed annuities that offer all of the above features, but if you consult an annuity specialist, you’ll find that they do exist! Choose a specialist that represents many companies; if he or she only represents one company, only very limited choices may be offered.

Now that you know a little more about annuities, here are four good reasons to buy an annuity now:

The stock market looks a little scary! The S&P 500 has had corrections of 10% or more every 1½ years, on average, since 1957. The last correction of this magnitude was in the summer of 2011! Does it seem like we are overdue?

Stocks are expensive: The average price of stocks today is 26 times earnings, in contrast to their long-term average of 15 times earnings. This is higher than any time in the 20th century, except for the months that preceded the two biggest stock market crashes in history in 1929 and 2001! In the past, without exception, stock prices as high as they are today have foreshadowed poor returns in the market for the next seven to 10 years!

The Federal Reserve tightening interest rates often precedes market crashes, as was the case from 1999-2000 and 2004-2007, before the last major crashes. These observations by market sage Henry Blodget argue for psychologically preparing for poor long-term returns.

Margin debt is high: Money is cheap. Investor debt is now higher than it was just before each of the two most recent crashes (2001 and 2008), both of which took stocks down 50%! How does contemplating a market drop of that magnitude make you feel?

You don’t have to stay in the market if you choose not to. There’s a great option called the fixed indexed annuity that can give you the ability to profit from the stock and commodities markets with absolutely no risk whatsoever! So, don’t worry about “missing out on the action.” Just imagine how you’d do in the market if you never had to factor in losses! Well, that’s exactly what these annuities do. You only participate in the market action on the upside, never the downside! When you make money, it locks in, so you won’t ever lose it. The annuity will pay you and a spouse guaranteed income for life, and while you’re receiving that pension-like income, you’ll still be generating interest on the money you haven’t withdrawn. The best annuity of this type pays you an extra 4% on top of your indexed interest for every year you delay taking your income! Maybe it’s time to consider what the fixed indexed annuity can do for your retirement plan.

Jerry Rubin works full-time as a retirement planner and has headed his own firm, Retirement & Legacy Planning in Bucks County, Pennsylvania, since 1989. Jerry is a U.S. Navy Veteran, Temple University alumni, and former professional pilot. Each of his clients benefit from a never-ending flow of income for their retirement that they’ve established under Jerry’s guidance. Click here to contact Jerry.